Just over ten years ago I met the love of my life, who I am now happily married to.
I didn't realise at the time that I would also be finding a new way of life and something that I would go on to care so passionately about.

Horse's were the way of life for my new family, all of which was completely alien to me.
My previous work couldn't have been further away from anything equestrian. I specialized in security but had been a Jack of all trades since leaving school as soon as I could. I wasn't an academic. I struggled at school due to being very dyslexic. Whilst I could express myself verbally very well it was the getting it down on paper that was near on impossible.
However not one to wallow in self pity I worked to my strengths, and through sheer hard work and determination I managed to gain promotions in every job I undertook which is something I'm seriously proud of, after years of being written off at school.

Horse's had never even been a hobby of mine, my hobbies were all team sports. I had played both hockey, football and rugby to fairly high and successful levels. In those sports it's all about the "team".
Suddenly I found myself in the equestrian world and it was so weird for me as I found it at first to be very elitist and a lot of individual competitiveness. This was so strange to me as I had always been involved with my team mates supporting me and me supporting them.

After years of helping to look after my families horse's as well as other people's I had learned so much more than I ever imagined I could due to my previous ability when it came to learning things. And it certainly was one hell of a learning curve. Having never owned a horse of my own before I saw a random advert for a Shire horse located over in Wales.
The rest is history. I fell in love with my boy Charlie, all 17"2 hh of him!

Charlie sadly passed away in 2016 at the grand old age of 26 (old for a heavy horse) after discovering he had a tumour in his throat. Whilst he is sadly no longer with us, his legacy very much lives on here at Newbrook. Charlie was one of the original fab four neddies that inspired us to open Newbrook as a safe haven for injured or old neddies.

Nowadays the neddie in my life is the larger than life 19"3 Shire diva which is Big P. Going by her full name of Decoy Princess Dawn this gorgeous neddie was a fantastic showing horse, impressing the public and judges where ever she went. Big P is an absolute pleasure to spend time with and is so incredibly loving. I might even turn my hand to showing, although it will definitely be her doing the teaching rather than the other way round.

When we relocated our horse's to Newbrook I spent a lot of time on my own looking after them due to other family members being injured. I wasn't in a particularly good place in my own head at the time. However I found being at the farm and around the horse's was one of the few places I felt most relaxed.
It was something about Newbrook and being around the horse's that just seemed to make whatever stresses were going on in life ease away.

Anyone who knows me knows that I'm not really in to relaxation therapies etc but being there and being around the horses in such a beautiful natural environment just seemed to make everything feel that little bit better everyday.
When we decided along with our farmer Fred to open Newbrook to the public I was very keen to promote a sense of being a "Team" and that horse's should be available to everyone not just those who could afford the high prices normally involved with anything equestrian. I wanted it to be available to anyone who would benefit from being around them
because I had seen, not only in myself,  but also in the children we used to foster that people can become the very best versions of themselves when around the neddie's.

It wasn't just the people who seemed to thrive in this environment. The horse's seemed to as well. I had never seen our horse's look so well and alive and the only thing that had changed was the location but it somehow made all the difference.
Rather than the normal horsey paddocks they had large open fields to roam around, with hills and tree's and amazing organic pasture with wild flowers growing in them.

It was because of all of the above that Newbrook has developed in to a safe haven for both people and horse's.
We have so much more we want to do and achieve with Newbrook, and I am personally very passionate about our welfare and charity work and would love do expand what we can achieve with this work.
I spend a lot of my time managing the land and maintaining the fields, which means I get to enjoy watching the horse's just being horse's which is a real privilege.

It's especially nice to be around the retirement horse's, as for them their work is now done and they are at Newbrook to enjoy their retirement in as natural environment as we can safely provide them with. They get to go back to just being a horse with minimal interruption's from us. It's such a pleasure to watch. And yes working with the retirement horse's means that we are also likely to be a part of their final journey as well. Which no matter how times we have to deal with never gets any less upsetting for everyone involved but when their time does come it's our responsibility to make sure that transition is as stress free for both horse and owner's.

I grew up next to a farm and helped with the milking morning and evening. They ran a side line buying and selling a few horses and this is where the major addiction to horses began. I went on to ride for a number of different people before having my children.

I then embarked on legal career but soon realized that an office based job was never ever going to be something I would enjoy and the horses soon took over again.

We fostered a number of children and ran a small yard. My interest and main focus turned from riding and competing to looking at ways that horses could help the sometimes very troubled children that were placed with us. This is now what is known as Equine facilitated learning (EFL) and Equine Facilitated Psychotherapy (EFP).

I am very much involved in all aspects of running the business and feel very privileged to be able to do what we do. We are absolutely committed to horse welfare and I am a very firm believer that should people wish to learn to ride that they embark on learning all aspects of healthcare and wellbeing also. We are aiming to be different from the normal riding establishment. We don’t want to simply take people’s money and see the horses as objects to make money. We want to and are achieving a culture where people want to learn and gain knowledge and appreciate the horses for the magnificent animals that they are.

2019. I am working hard training for my diploma in psychodynamic counselling. Next year once I have qualified I shall be working towards accreditation with the BACP. I then hope to qualify further as an Equine Facilitated practitioner to build upon skills that I already put into practice. I hope to complete a course with IFEAL and then EQUUSOMA which specifically relates to trauma.  Although this is not essential to what we already do at Newbrook I feel that this extra training will put us at the forefront of this now recognized form of therapy.

I grew up with horses and have always had a passion for animals. However, in my early teens I took a break from horses. After my GCSEs I went to college and studied photography for two years. Despite enjoying the course I soon realized that animals were my passion. I then went to Hartpury college and studied animal management for a year.

As the family business began to grow I decided to return to working with the horses and sheep on a full time basis. This was an easy decision to make as Newbrook is an amazing place to be.

My responsibilities are wide ranging. I help with all the day to day activities that are involved with caring for the horses. I especially enjoy caring for the retired horses that have come to us for a variety of reasons.

I also take many of the hacks out and show the riders the beautiful countryside we are lucky to be part of.

Mr. Poo is my boy. We have a wonderful connection and enjoying hacking in the beautiful countryside as well as enjoying a good old blast at a fun ride.

I also get to ride the very gorgeous Ethel (A.KA. Etty)  She is a beautiful mare who loves to jump, and just wants to please.

I've only owned Etty since the start of the year but with spring fast approaching I am hoping to take her out and about competing. ​ 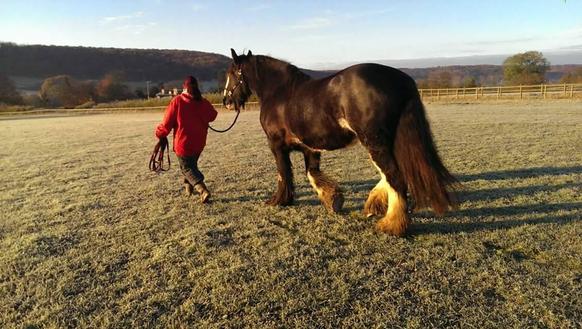 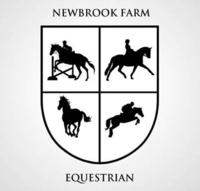